Offical confirmation of the registration of a new imidazolinone (imi) herbicide has paved the way for the release of the world’s first imi tolerant oat variety.

Kingbale will be released by InterGrain this season.

It will be treated with Nufarm’s Sentry herbicide, which has been registered for use in the oat crop, although the crop will only be for hay and seed production, not for grain oats until further research is conducted.

InterGrain and Nufarm, together with Grains Innovation Australia (GIA) worked together to develop the variety, which was bred by Michael Materne of GIA.

Kingbale is a mid-maturing variety with improved tolerance to soil residual imidazolinone herbicides.

InterGrain expects this will suit both growers concerned about imi residues from a previous crop or for those wanting to use it in conjunction with Sentry.

Agronomically Kingbale is a tall variety that has a similar disease resistance profile to the popular hay oat Wintaroo.

It has resistance to Cereal Cyst Nematode (CCN) but is likely susceptible to rust so will require proactive management with registered fungicides.

The new herbicide Sentry contains imazapic and imazapyr and is registered for use pre-sowing on a range of grass and broadleaf weeds including barley grass, brome grass and wild oats.

Sentry herbicide can be used in Kingbale crops intended for forage, oaten hay or seed production.

Officials said that when used in accordance with label instructions, Sentry was suitable for use in export oaten hay crops as no detectable residues are expected in either oaten hay or forage.

Nufarm has developed an industry stewardship program that will be released shortly and will become part of the broader Nufarm imiCrops program.

A GLOBAL first was revealed at the Hart Field Day on Tuesday – a new imidazolinone-tolerant oaten hay variety GIA1701 was launched, dubbed ‘Kingbale’.

A joint effort by Intergrain, private breeding company Grains Innovation Australia and Nufarm, Kingbale is the first imi-tolerant oat variety in the world.

It is also the first product GIA has brought to market since its establishment in 2012.

“We have a lot of expertise in imi-tolerant wheat and barley varieties, so this was an exciting diversification,” Intergrain chief executive officer Tress Walmsley said.

Ms Walmsley said there would be restricted access to seed from next year, while a proper stewardship package was developed.

“We want to ensure we have done all the right things before broad-scale commercial production,” she said.

“Growers will be able to use this for a pre-emergent herbicide application or for plantback opportunities, following on from other imi-tolerant crops they may have grown the years before,” Ms Walmsley said.

There was also a wheat session held at Hart where breeding companies gave updates on other new varieties available for the 2020 season, including Catapult from Australian Grain Technologies, Longreach Nighthawk and RockStar also from Intergrain. 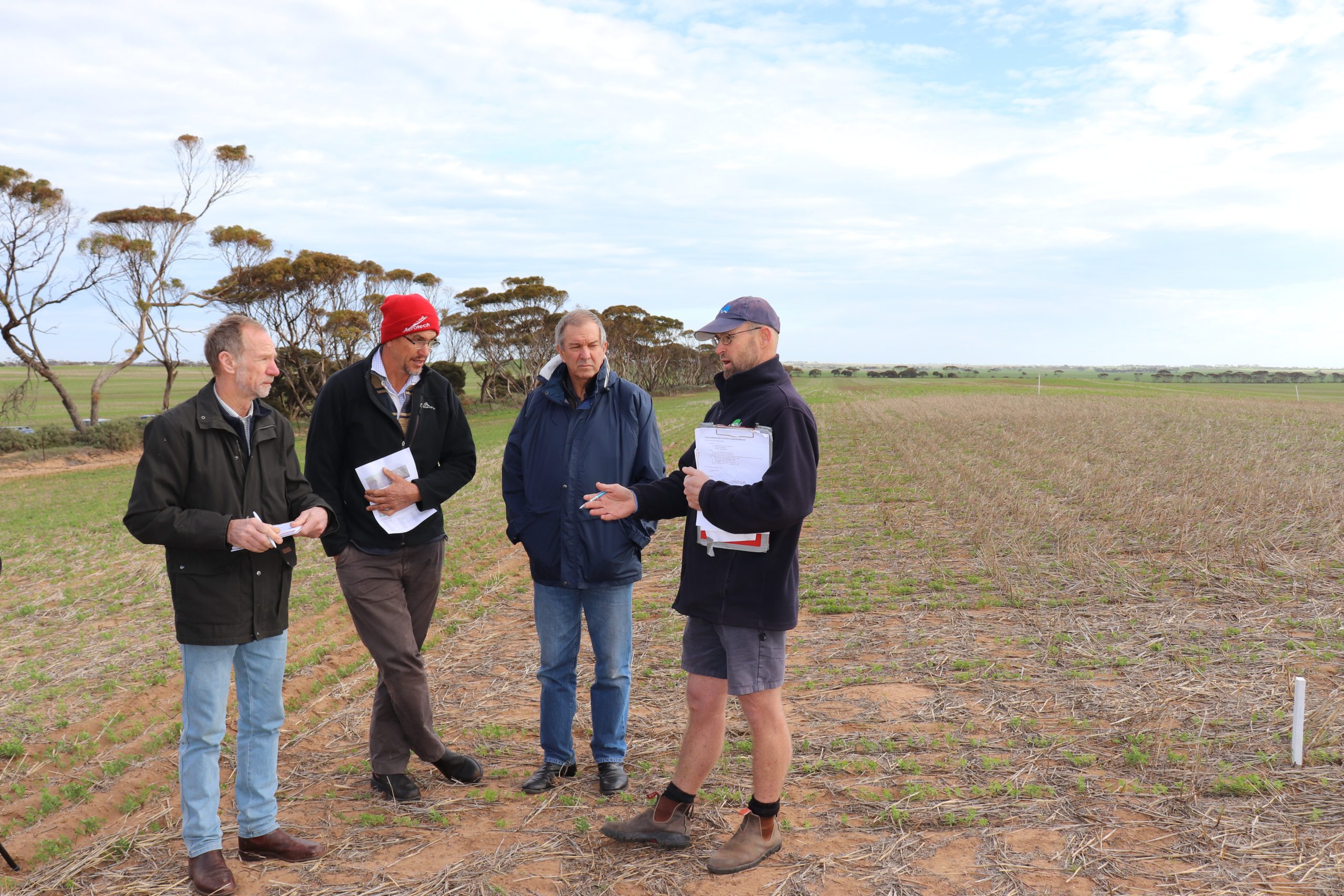 The project, led by Larn McMurray, a pulse researcher with Global Grain Genetics (GGG), the research division of Grain Innovations Australia, aims to develop the new lentils through two strategies.

One approach is the development of lentil germplasm, which is specifically adapted for low rainfall cropping areas, by selecting for morphological and phenological adaption in a low rainfall environment from a large genetically diverse population of PBA Jumbo2  created using conventional breeding methods.

The second strategy is combining the agronomic characteristics of the high early vigour trait that was developed in a PBA Hurricane XT based breeding population by GGG, with the high-yielding disease-resistant background of PBA Jumbo2 and improved herbicide characteristics also developed concurrently by GGG.

“The trials are allowing us to look at how individual traits perform in these low-rainfall environments,” Mr McMurray said.

“We’re testing herbicide tolerance traits across a range of herbicide groups and are also looking at the early vigour trait.

“Our aim is to put these traits together to make a more robust lentil for these environments.”

Trials were sown in mid-May at Alford on the Northern Yorke Peninsula, Pinnaroo in the SA Mallee, and Hopetoun in the Victorian Mallee.

“Rainfall has been low this year, so it will be interesting to see how the high vigour lines perform,” Mr McMurray said.

“Further lines will be selected from our diverse breeding population, which was sown at Pinnaroo this year, and these will be tested in field trials in 2019 and 2020,” Mr McMurray said.

“The other part of the SAGIT-funded work is to see if we can develop some new traits which have a real importance to low-rainfall areas.

“We’re using the same process of developing genetic diversity in PBA Jumbo that we used to develop the novel traits in PBA Hurricane XT.

“We’re looking at a hectare block of the PBA Jumbo based breeding population and aiming to see what sort of diverse traits we can find, which may have benefits for low-rainfall areas.” 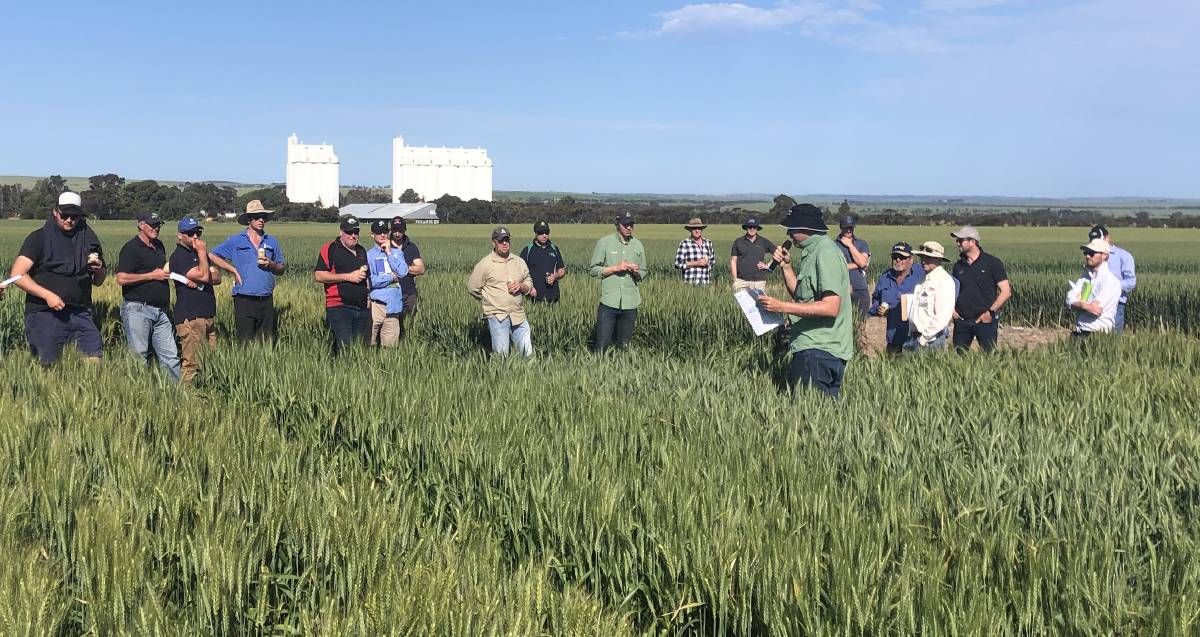 Mr Taylor, who has worked through a wide range of rainfall zones and yield environments across the Western Australian wheat belt, is currently based at Kellerberrin and Cunderdin as an agronomist and partner at DKT Agencies.

Mr Taylor talked to the group about the opportunities and problems GM crops presented for farmers, as well as tackling multiple issues like high weed burdens with resistance and correcting subsoil acidity, while also trying to keep farms profitable.

“Helping farmers identify their biggest constraints to production and addressing them, often a number of them at once, is our biggest challenge,” he said.

Dr Kleemann spoke to the group about resistances, covering why some herbicides work better than others based on adjuvant quality and how to maximise ryegrass control particularly in paddocks with mixed chemical resistance.

Growers were especially interested in the planned release of several new herbicides as well as breeding developments in canola varieties.

The final stop on the tour was at a cereal trial site at Yeelanna where growers networked with industry specialists to look at timing of sowing trials as well as cereal disease management, new varieties and improving wheat establishment on heavy soils.

Landmark agronomist and trial manager Patrick Head said the bus tour was an opportunity for farmers to interact with researchers and agronomists and learn about varieties, rotations, disease management and issues which were directly applicable to their farming enterprise.

“All of our trials are relevant to farmers in our region,” Mr Head said.

“We are always looking at ways we can support their farming businesses and being able to provide accurate information about the best varieties to sow, how to implement weed and disease control strategies, and tools to improve yields will help them to make more informed decisions in the future.

“This trial tour is also a way farmers can network with other farmers as well as scientists and product reps so they can ask questions and see the research being done first hand.” 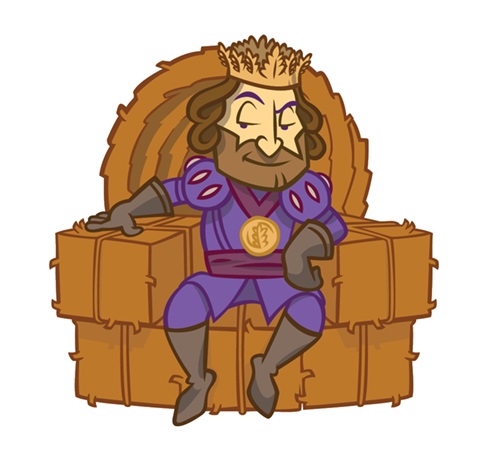 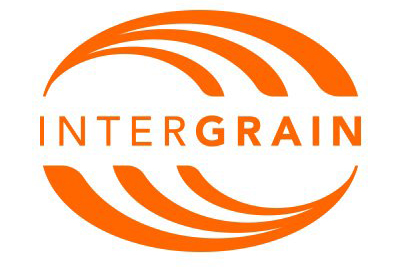 “Kingbale Oat Variety to Stack Up”

“The Nufarm partnership means InterGrain and GIA can introduce expertise in weed control and further sharpen our focus on innovative solutions that will help solve identified challenges for grain growers.

“InterGrain always prioritises maximising grower returns from the varieties we introduce to them and strategic partnerships can value add that proposition,” Ms Walmsley said.
A tall oat variety, Kingbale has good early vigour and preliminary data shows it has a similar disease profile to Wintaroo.

“Our new partnership with GIA and the Kingbale launch complements the current wheat and barley varieties we have available to growers and supports our Australia wide market leading cereal breeding programs.

“Kingbale is the first of what we like to call the new oat dynasty, with other lines in the GIA pipeline also set to deliver agronomic and yield benefits that will boost Australian oat and oaten hay production and subsequent profitability for growers,” Ms Walmsley said.

“We have been intensively developing Kingbale for four years and have trialled it in our South Australian and Victorian programs within our summer and winter programs,” he said.

“As we release varieties and help solve current grower and farming system limitations, we will be able to explore more of our novel, innovative ideas for a prosperous and sustainable grains industry and also continue to support the rural communities we are part of and unashamedly passionate about.” 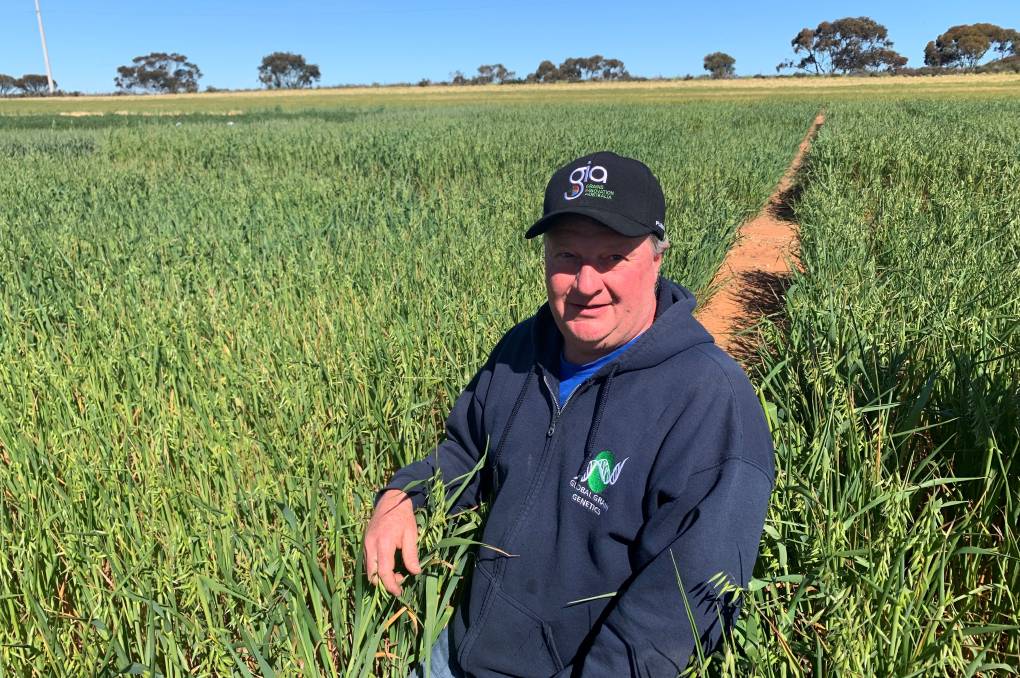 AUSTRALIA’S grain producers will have a range of new varietal choices following releases over recent weeks.

Headlining the new varieties is a world-first oat tolerant to imiadzolinone (imi), a widely used herbicide in Australian cropping systems.

Bred by Michael Materne, well known for his work in the pulse industry, the oat cultivar, called Kingbale, was developed by Grains Innovations Australia (GIA) and will be commercialised by Intergrain following a recent agreement with GIA.

“While looking over the fence from our pulse trials, we saw weedy oat crops and quickly learnt that herbicide options were very limited,” he said.

He said the crop was suited to growing where there was imi residue that would mean a non-tolerant variety was susceptible to herbicide damage.

“Kingbale’s imiadazolinone tolerance supports the variety as an excellent option where there are residue concerns from imidazolinone use in previous crops,” Dr Materne said.

A tall oat variety, Kingbale has good early vigour and preliminary data shows it has a similar disease profile to Wintaroo.

Meanwhile, Intergrain is also quietly excited about its new wheat, Rockstar, launched with both the Western Australian and eastern markets in mind.

Rockstar is designed for the mid- to late-flowering maturity bracket.

The new variety has yielded well in trials across a range of environments and has hard classification in the southern zone, with Intergrain awaiting classification for WA and southern NSW.

Meanwhile, newcomer to the wheat seeds market, S&W is upbeat about the prospects of their winter wheat DS Bennett.

DS Bennett, designed for planting in medium rainfall zones across Victoria and southern NSW, has performed well in trials in comparison to similar varieties.

“We are certainly seeing that our DS Bennett, as well as DS Pascal, are widely delivering excellent results for growers seeking dual-purpose wheat options in these unpredictable seasons,” Mr Willey said.

He said the variety could be used as part of a frost management strategy due to its flowering window.